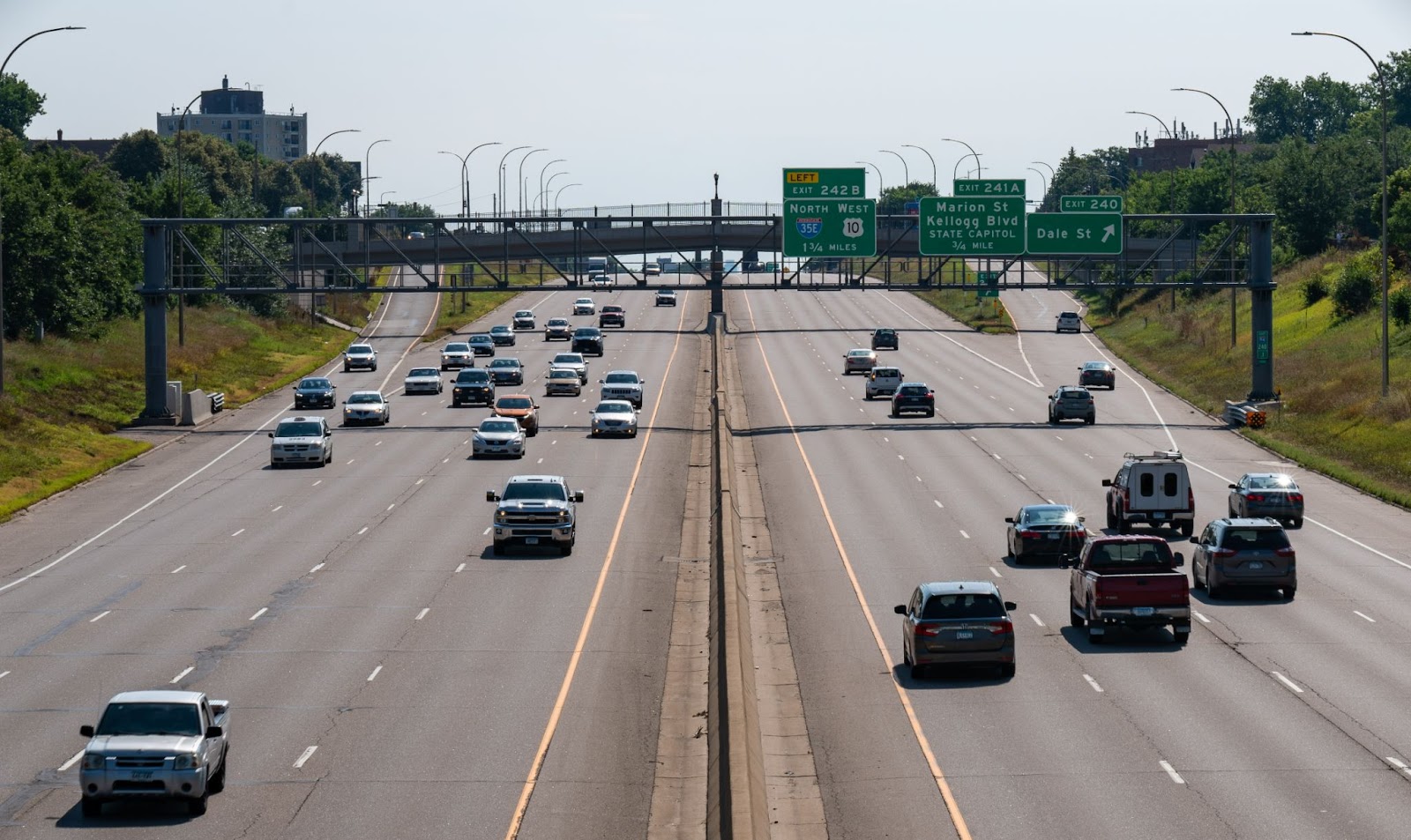 We Can’t Afford to let MnDOT Perpetuate the Status Quo

The Minnesota Department of Transportation (then known as the Minnesota Highways Department) and the Federal Highways Administration (FHWA) built urban highways like I-94 to facilitate white flight and suburban development and cement racial segregation. I-94 tore through the fabric of Minneapolis and Saint Paul neighborhoods. Homes and small businesses were bulldozed to make way for the freeway trench, creating scars across the city landscape. In Minneapolis, one out of every 20 residents lost their home to highway construction in the 20th century.

This devastation disproportionately impacted communities of color. Urban highways like I-94 were intentionally routed through predominantly Black neighborhoods, destroying homes, businesses and generational wealth. 80% of Minneapolis Black residents lived in the neighborhoods where I-94, 35W and Highway 55 were routed. In Saint Paul, 6,000 people and hundreds of businesses were displaced by I-94. This included the Rondo neighborhood, the heart of Saint Paul’s Black community. (Statistics from the HUMAN TOLL: A Public History of 35W exhibit at the Hennepin County History Museum.) 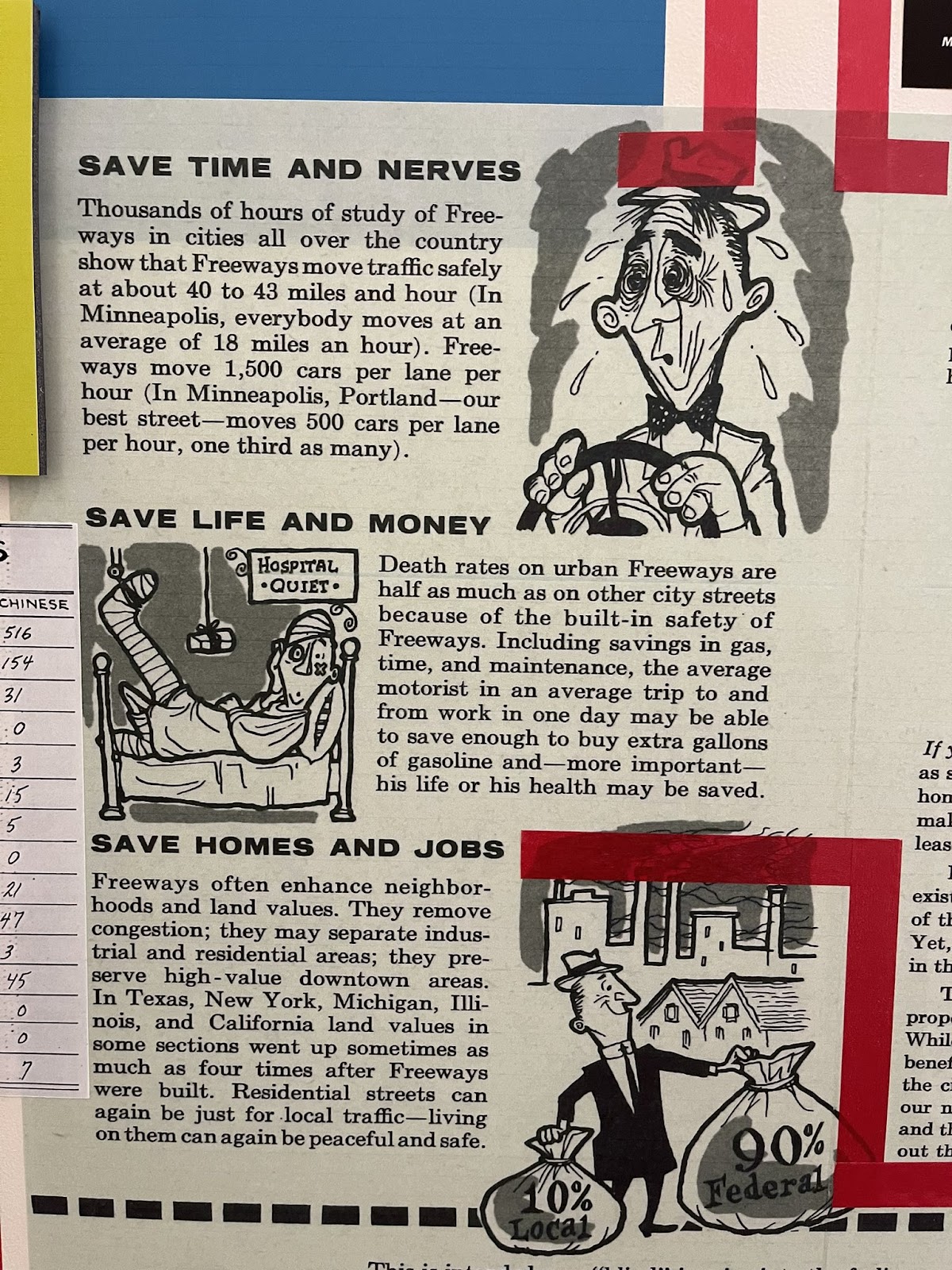 A 1957 City of Minneapolis brochure, 25,000 of which were printed and distributed to sell the proposed freeway system to the public. Source: Minneapolis City Archives

As I-94 was being planned in the 1950’s, the Minnesota Highway Department attempted to suppress community opposition to the highway by promising that it would bring untold benefits; congestion and traffic deaths would be eliminated, property values would quadruple, investment would return to the cities with new customers using the new highway. 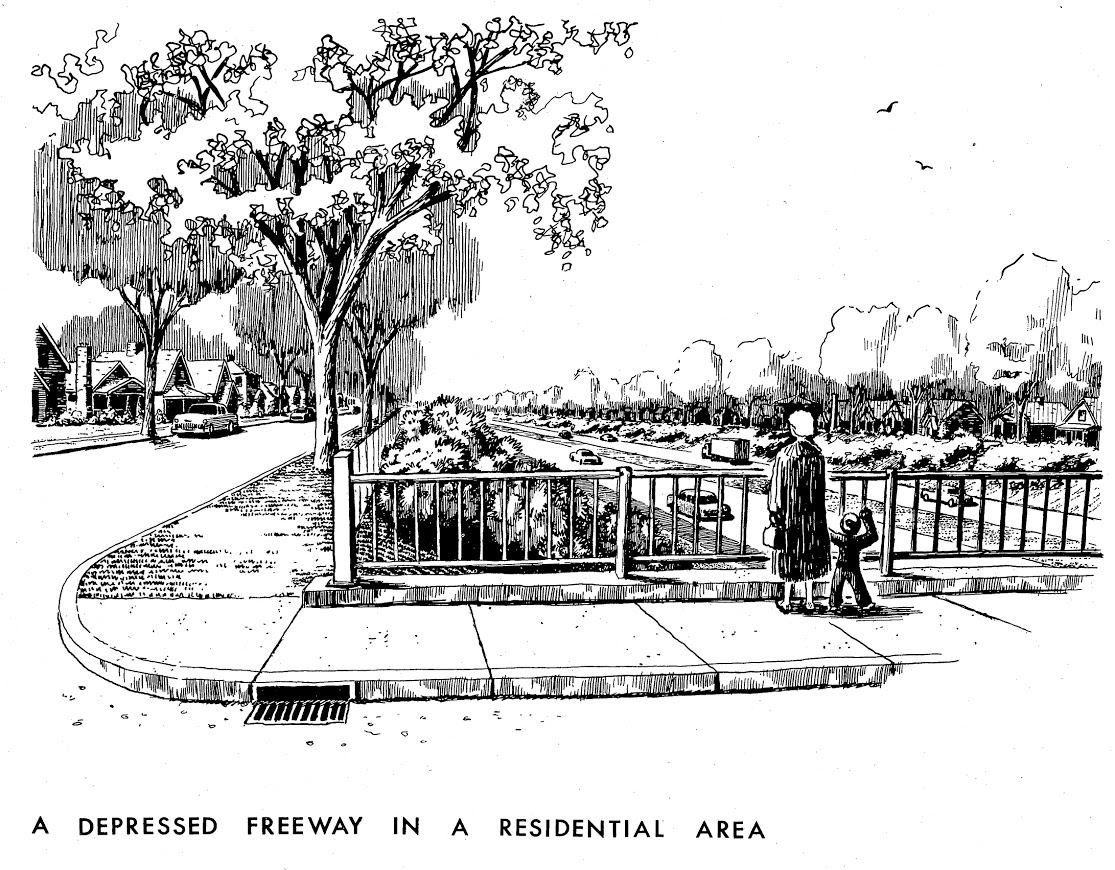 A 1957 rendering of the I-94 trench that was created by the Saint Paul City Planning Board. Source: Minneapolis City Archives

Highway planners used misleading renderings that idealized what the highway would look like to minimize community concerns about the impact to residential communities.

Over 60 years later, those promises never came true. Instead, these communities have endured decades of harmful impacts from the highway. Some of these impacts can be clearly seen, others are invisible. Added together, the result is that I-94 takes a daily toll on the well-being of the people who live, work and go to school nearby.

I-94 Creates a “Diesel Death Zone” and Environmental Injustice

More than 100,000 people live in the communities that border the highway in the Rethinking I-94 project corridor. Air pollution in these communities is nearly three times worse than what is deemed unhealthy by the Minnesota Pollution Control Agency (MPCA.) Highway traffic is the biggest source of this pollution.

The highway’s air pollution has contributed to the rate of asthma hospitalization near I-94 being double the Hennepin and Ramsey County average. Although Minnesota has the fourth highest life expectancy in the country, people who live near the highway in the Rethinking I-94 project corridor have a life expectancy that is 5 years shorter than the state average. In some of these neighborhoods, like Elliot Park and East Rondo, life expectancy is nearly 15 years below the state average. New estimates have determined that air pollution kills over 300 Minneapolis & Saint Paul residents every year.

As was the case during I-94’s initial construction, the highway disproportionately impacts the Black, Indigenous and people of color, who live along the highway corridor. Because of this, 94% of the project corridor has been identified by the MPCA as “an area of concern for environmental justice.”

This is unacceptable. These neighborhoods deserve clean air and healthy communities now.

I-94 Divides and Devalues Minneapolis and Saint Paul Communities

What was once thousands of homes and small businesses is now a trench the width of a football field. The I-94 trench creates both a mental and physical barrier that divides neighborhoods and makes it difficult for people to access their basic needs like work, school, healthcare and the grocery store. Crossings are infrequent and inaccessible. Traffic headed to and from I-94 clogs neighborhood streets and makes them unsafe.

The highway incentivizes suburban sprawl development and suppresses city property values. It sends customers, investment and job opportunities out of Minneapolis and Saint Paul and into the suburbs, making it more difficult for small businesses to thrive in our communities.

Because of this, the walkable, locally owned businesses and good paying jobs that were once prevalent are becoming less and less common. Despite the promises of prosperity by I-94 planners, highway adjacent communities suffer from disinvestment and lack of economic opportunity. The average household income in the neighborhoods along I-94 is 25% less than the Minneapolis and Saint Paul average. Many residents in the project area lack convenient, walkable access to amenities like grocery stores, health care and locally owned businesses. Others are forced to travel long distances to access employment opportunities that pay a living wage.

I-94 Prioritizes Suburban Drivers and Restricts Affordable and Accessible Transportation

I-94 was built to speed up driving times for suburban commuters. The highway is not meeting the transportation needs of Minneapolis and Saint Paul residents.

This is especially true for the 28% of households near I-94 who don’t own a car. This includes immigrants without access to a driver’s license, people who are unable to drive due to disability and the many people who can’t afford the increasingly high cost of car ownership. The percentage of transit-dependent households in the neighborhoods along I-94 is nearly double the Minneapolis and Saint Paul average and is four times the Twin Cities average. In other words, the people most harmed by I-94 use it the least.

For these people, walking, rolling and biking options in the I-94 corridor range from unpleasant and unsafe to non-existent. Transit service is infrequent and often takes 4 to 5 times as long as driving.

For those who do drive on I-94, the highway is equally insufficient. The high speeds and traffic volumes on I-94 and feeder streets create crashes that result in death, injuries and permanent tragedy. The highway doesn’t even deliver on its promise of fast and reliable driving times. Traffic grinds to halt during rush hour, after a crash or in inclement weather. Decades of data have shown us that as freeways are expanded, the more that people drive, a phenomenon known as induced demand. Freeways will never alleviate traffic congestion, in fact, they create it. This is why a 26 lane freeway expansion in Houston resulted in traffic becoming worse just three years later.

Access to quality transportation is a human right. It shouldn’t depend on one’s ability to own a car. We deserve better transportation options that are fast, affordable and convenient.

I-94 Worsens the Climate Crisis

Both the City of Minneapolis and Saint Paul have determined that even with rapid electrification, it won’t be possible to achieve their climate goals without reducing driving by about 2% per year. We will not be able to meet necessary emissions reductions targets if the Minnesota Department of Transportation continues to double down on freeways while ignoring investments in clean transportation options like walking, biking and transit.

Every year that the I-94 trench continues to exist is a tremendous missed opportunity to replace it with infrastructure that benefits, not harms, the surrounding communities. The highway occupies over 284 acres or nearly half a square mile within the Rethinking I-94 project area. This land generates no tax revenue that could be used to fund vital city services.

Instead, it costs hundreds of millions of public dollars to maintain the highway’s pavement, retaining walls and bridges. It simply doesn’t make sense to continue dumping hundreds of millions of our tax dollars into an idea that doesn’t work and provides limited benefits at a great cost to surrounding communities. The Rethinking I-94 project is our once-in-a-lifetime opportunity to reclaim the highway land and transform it into that puts community needs first.